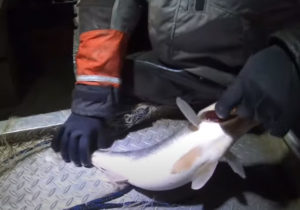 Teams of experts have been conducting what amounts to an annual egg hunt for the state-run fish hatcheries.

Michael Hawkins, a fisheries biologist with the Iowa Department of Natural Resources, was at work yesterday in the Spirit Lake Fish Hatchery near Orleans.

“When we were taking eggs from some of the walleyes in the hatchery yesterday, those were our Easter eggs for sure,” Hawkins says.

Every year — once the ice comes off Storm Lake, Clear Lake, Lake Rathbun, and the Iowa Great Lakes — Hawkins and other DNR staff start the process. They board boats, cast long nets and collect adult walleye, northern pike and muskies.

“We don’t see a lot of natural reproduction of those species in Iowa and so their populations here are maintained through our hatchery production and stocking efforts,” Hawkins says.

It’s an all-hands-on-deck, day-and-night effort by the staff in the state fisheries bureau, according to Hawkins, but it’s been complicated this year by COVID-19. Due to restrictions on travel as well as social distancing in the boats and inside the hatcheries, the number of fish to be hatched and redistributed around the state this year will be reduced. Hawkins says his crew was able to collect about half its normal egg take for the Spirit Lake hatchery.

“Looks like we’ll be able to hatch out about 55 million walleye fry at this facility and there’s others going on down at Lake Rathbun as well,” Hawkins says, “so trying to maintain some of those walleye and pike and muskie in the pipeline.”

Northern pike spawn first, so that process started earlier. Hawkins says muskie like warmer water, so the collection of muskie for the hatcheries will start in a bit. Hawkins and others artificially help these three species reproduce in the state-run hatcheries because they don’t typically reproduce in Iowa lakes.

“We bring these females in that are full of eggs. We actually just apply a little bit of pressure to their abdomen, all the eggs come out and then we use sperm that was collected the night before from males and use that to fertilize the eggs,” he says. “We get a really high fertilization rate when we do that, maybe 70% or greater of those eggs will be fertilized and a large percentage of those will then hatch in our incubation jars.”

Thousands of people typically visit the Spirit Lake hatchery to watch the process and Hawkins says it’s rewarding to see their reaction to the big fish and the artificial spawning the staff manage.

“We’re all really bummed that we haven’t been able to see anybody’s faces this year,” Hawkins says. “Our state facilities are all closed and so we’re doing our best.”

There was a recent Facebook live event at the Spirit Lake hatchery to showcase the process.