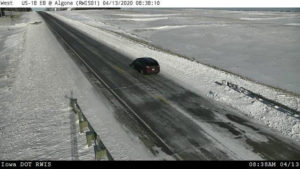 The Easter Bunny was leaving plenty of tracks in the snow this year.

Northwest Iowa was particularly hard hit by unseasonal snowfall on Sunday, according to meteorologist Jim Lee at the National Weather Service. “The highest snowfall amount we had reported was from Ringsted up in Emmet County,” Lee says. “That was measured at 11 inches total, which is quite impressive for this late in the season. We had multiple inches of snow across the northwestern third or quarter of the state.”

Several communities in the region reported snowfall records both for the date of April 12th and for Easter Sunday. While we’re several weeks into spring, Lee says the signs of this late winter snowfall won’t be disappearing anytime soon. “Especially with northwest winds today, we don’t look to melt a lot of it off, despite the mid-April sun,” Lee says. “It’s going to take a while to get rid of that nearly a foot of snow up in Emmet County. We’ve got high temperatures forecast only in the low to mid 30s for the next several days and finally peaking back into the 40s toward the end of the week.”

Warmer weather will eventually return to Iowa but Lee says it likely won’t be until this coming weekend. “By Saturday and Sunday, for the majority of the state that does not have snow cover, we’re looking at temperatures poking up toward the low 60s or so and over the melting snowpack, perhaps into the 50s,” Lee says. “There is going to be some relief on the way but that’s going to be several days out yet.”

Lee says there’s a chance for light snow again today across parts of northern Iowa, but there shouldn’t be much in the way of additional accumulation.