You are here: Home / News / Study of bat sounds will continue across Iowa 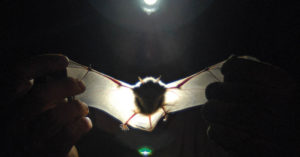 DNR photo of a bat.

A study of bats that’s been going on for several years is shifting focus a bit this year.

Iowa Department of Natural Resources endangered species coordinator, Kelly Poole, says they record the sounds made by bats.  “We use volunteers to do it, the data are being analyzed to see what types of bats, what species of bats we have, get a sense of what types of bats we have in different areas,” Poole says. She says the studies were started as a way to track bats as concerns about the white-nose syndrome in bats rose.

The studies have focused on the main bat hangouts. “Often driving thorough forested areas, roads that come through parks or bat habitat,” according to Poole. “We are now shifting because there is a new project called the North American Bat Monitoring Project that has established random grids throughout all of the states.”

Those random grids take the acoustic study of bats into some new territory. “Rural areas, agricultural areas, urban areas, as well as bat habitat. This is the first year where we will be collecting in areas other than habitat-rich areas,” she explains. Bat use a type of radar that helps them navigate and find food, and that is what the volunteers will record.

“Bats are emitting signals as they are socializing or feeding,” Poole says. “They’re out emitting calls and that bounces back and they are able to zero in. It’s called echolocation, they zero in on their target — which is a bug in flight usually — and they can get that.” The recorded bat sounds provide a signature of who they are. “It’s really interesting because different bat species communicate at different frequencies –and so these acoustic detectors are collecting information and there are software programs that filter that information through and then classify, or give you potential information on bat species,” Poole explains.

The bat sounds are emitted in high frequency, medium frequency, or low frequency. “You can pretty quickly get them narrowed down to a specific group of bats by the frequency that they are calling in,” Poole says. “Several groups within that high-frequency group are species that are endangered, federally endangered or protected. So, we are kind of interested in what is happening with that activity and those calls.”

The acoustic collection of bat soundings will begin in June and July. Iowa State University is coordinating the volunteers for the program, which is being funding by a federal grant.