Governor Kim Reynolds today said the full extent of the COVID-19 outbreak among employees at the Tyson meatpacking plant in Columbus Junction isn’t yet known, but the governor’s spokesman said so far 166 employees have tested positive for the virus.

Test results processed between Sunday and Monday alone indicated 86 workers have the virus. Reynolds indicated another 80 positive test results are from last week in Louisa and surrounding counties.

“We’ll be able to tell the numbers that tested positive that’s tied to the plant and they’re working on doing that through the contact tracing,” Reynolds said, “so we’ll have those numbers going forward.” 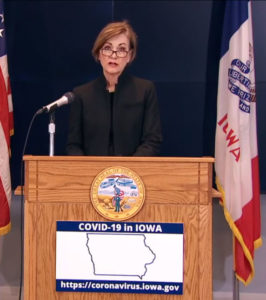 The plant processes pork and was closed April 6th after the first batches of test results show more than two dozen employees had COVID-19.

“Public Health has been working with management at the plant to test their staff,” Reynolds said.

The governor yesterday indicated state officials have secured extra testing supplies for the plant, which employs about 1,4oo people.

(This story has been updated to reflect the correct number of positive tests among employees at the Tyson plant in Columbus Junction in 166, not 186.)