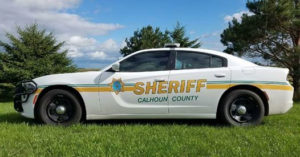 The Calhoun County Supervisors on Tuesday met in a closed session and found that sufficient cause appears from the verified allegations to suspend Anderson for willful misconduct or maladministration in office and for intoxication pursuant to Iowa Code.

The court order named deputy Jeff Feldhans as acting sheriff until a temporary sheriff can be appointed. A criminal complaint stated Anderson was arrested Saturday night by officers after he allegedly was pinning a woman to a bed in his home and holding her by the neck, choking her as she gasped for air. It took six officers about nine minutes to handcuff him and drag him to the patrol car after he refused to cooperate with the arrest.

Anderson pleaded not guilty to assault on persons of a certain occupation on Monday. Another charge of domestic abuse assault was continued for 180 days. The 51-year-old Anderson has been the sheriff since 2018.