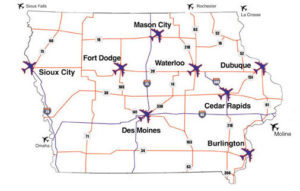 The Federal Aviation Administration is sending more than 70 million dollars ($70,467,304) to 79 airports in Iowa as part of the federal coronavirus relief package.

Stuart Anderson with the Iowa Department of Transportation says the money is designed to help airports deal with the drop in flights brought on by the virus outbreak. “For example, commercial airports generate revenues from parking lot fees, receipts at their retail facilities at the terminal. They’ve lost a lot of revenue with this downturn,” Anderson explains.

Iowa has eight commercial airports, and he says the money will help with some of those losses. “And also cover some of their increased costs as they’re providing personal protective equipment and making other expenditures — it’s pretty flexible spending,” Anderson says.

Here’s the list of airports and the amount of money they will receive:
FAA Airport Funding