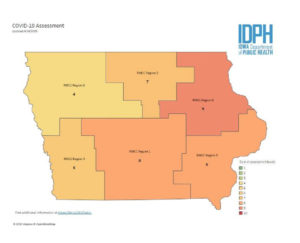 State officials have deployed 13 new Abbott machines that provide a rapid result for COVID-19 tests to hospitals and other facilities in rural areas that can serve as a hub for testing in several communities.

One of the testing machines is a community health center in the tiny Louisa County town of Columbus City. It’s less than three miles away from the Tyson pork plant in Columbus Junction that’s shut down due to a COVID-19 outbreak among workers. Another machine has been placed at the Iowa Veterans Home in Marshalltown which provides nursing care to 500 residents.

The 11 other machines were sent to hospitals in Algona, Boone, Independence, Manchester, Mt. Ayr, Osceola, Red Oak, Spencer, Storm Lake, Washington and Waukon. A spokesman for the governor said those hospitals were chosen based on factors like the number of long-term care facilities in the area. The machines have limited testing capacity, though, until the state gets more testing supplies. That’s another reason they were placed outside of Iowa’s largest cities.