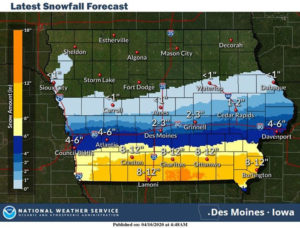 We’re almost four weeks into spring but Iowa’s southern half is quickly looking more like mid-winter.

Up to a foot of snow is in the forecast for some areas of Iowa today and a Winter Storm Warning is posted for two-dozen counties. Meteorologist Kenny Podrazik, at the National Weather Service, says snowplows are already out, working to keep the roads clear.

“The heaviest snow is going to fall across far southern Iowa, the southern two tiers of rows towards the Missouri border,” Podrazik says. “There’s already been a couple of reports down there of two-to-five inches near Lamoni and there’s additional snow that’ll be falling throughout much of the day and into the afternoon.”

Just a few days ago, on Easter Sunday, parts of northern Iowa were whalloped by record-setting snowfall, with the Emmet County town of Ringsted reporting 11-inches of snow. Podrazik says today’s snowfall could bring multiple new records, too, especially if the region sees a full foot of flakes fall.

“Anywhere from Creston to Chariton, down to Lamoni, all the way to Ottumwa, even as far east as Burlington, they could definitely see eight to ten or even up to that 12-inch range,” Podrazik says. “It’s going to be that wet, sticky, sloppy snow. There’s definitely the potential it could stick to a lot of trees and power lines and maybe cause some issues with that.”

If you just don’t feel like shoveling that snow or maybe you’ve already drained the gas from your snowblower, never fear, as those deep drifts won’t last long. “We’ll have one more cold day tomorrow when we’ll be stuck in the 40s for much of the state and then we’ll be back up into the mid- to upper-50s around 60 on Saturday and Sunday,” Podrazik says, “and then even warmer on Monday and then Tuesday, we’re talking possibly mid-70s across central and southern Iowa.”

Forecasters say the majority of northern Iowa should get missed by this snowstorm. The latest prediction calls for at least some snow to fall as far north as Carroll, Ames, Waterloo and Dubuque, while the worst of it should stay generally south of Interstate 80.