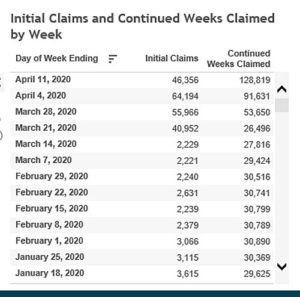 The number of new state unemployment claims remained high — but did drop from the previous week.

The U.S. Labor Department says new claims for the week of April 5th through the 11th were 43,862. That’s down from more than 67,334 first-time claims filed in the previous week.

The health care and social services industries had more than 6,789 new claims, and manufacturing had just over 6,002. The retail trade saw 5,813 and food service and hotels had 4,292 new claims.

The report says there were 128,819 continuing unemployment claims.