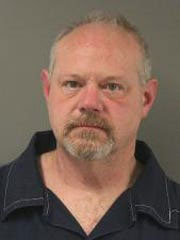 The wife of Calhoun County Sheriff Scott Anderson has posted an online video in which she says the allegations he attacked her were blown out of proportion.

In the video, she says the allegations Anderson assaulted her and a police officer and the petition for his removal from office are a “witch hunt.” Anderson was arrested this past weekend on charges of domestic abuse assault and assault on persons in certain occupations.

Anderson’s wife refuted the allegations that he choked her as stated in the criminal complaint. In the video, she says of the weekend incident, Anderson did become intoxicated and obnoxious. She also said Anderson did not deliberately head butt a police officer but that he was in handcuffs and was trying to take a drink of water.

On Tuesday, Anderson was suspended from his position after a judge granted a petition filed by the Calhoun County sheriff’s office. A hearing is scheduled for later this month regarding his removal. Anderson’s wife says in the video these allegations stem from people who do not want him re-elected.

She went on to say she did not want Anderson arrested and that one of her children reported the incident.