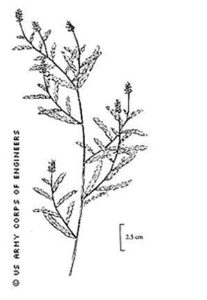 A pesky plant has invaded the largest natural lakes in Iowa and efforts are underway to reduce its presence.

“Curlyleaf pondweed has actually a long history in the Iowa Great Lakes and throughout the United States,” says Michael Hawkins of the Iowa Department of Natural Resources.

Hawkins says the plant’s growth has “exploded” especially in the northern half of East Okoboji Lake.

“It’s shallow enough there that the plant reaches the surface and has formed these very, very dense mats of growth in the early spring,” he says.

Unlike most other plants in Iowa, Hawkins says curlyleaf pondweed germinates in the fall and continues growing under the ice “and then in the spring, when the ice goes off, it comes to the surface pretty rapidly.”

Hawkins says it grows even more during mild winters — like this past winter — when there’s not much snow piled on the ice. The DNR is using a machine that looks a bit like a combine to harvest the plant, bring it ashore and dispose of it. That’s an expensive process and Hawkins says they’re using aquatic herbicides, too. Private pond owners can use herbicides, but only the Department of Natural Resources has the authority to use herbicides in public lakes like the Iowa Great Lakes.