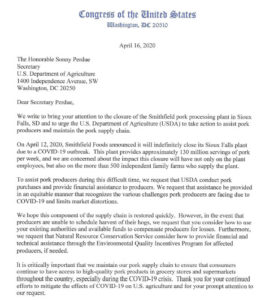 Iowa’s congressional delegation and the leaders of ag and commodity groups are warning the coronavirus pandemic is significantly damaging the rural economy.

Some dairy farmers have dumped milk due to the dramatic drop in demand. Tom Vilsack, the former Iowa governor who served eight years as U.S. Secretary of Agriculture, is now president of the U.S. Dairy Export Council. He’s joining the call for federal purchases of dairy products for food banks.

“It’s time for the U.S.D.A. to minimize the barriers to getting food supplies out to people in need,” Vilsack says, “and it’s time for them to maximize creativity in terms of the assistance and help that it can provide.”

Former Iowa Agriculture Secretary Patty Judge is co-founder of a group called Focus on Rural America. She says the mom-and-pop shops that small towns depend upon will die without more federal support.

“We are facing tough, tough times,” she says. “…We cannot structure aid packages so that only the big survive.”

Judge says bailouts to airlines, oil companies, and cruise lines won’t help the rural economy. National Farmers Union President Rob Larew says aid must go to those who need it the most.

Senator Chuck Grassley tweeted yesterday that he’s asked President Trump to give special attention to the closure of pork and beef processing plants. Grassley, along with Senator Joni Ernst, Congressman Dave Loebsack and Congresswomen Cindy Axne and Abby Finkenauer co-signed a letter to the U.S.D.A. They’re asking the agency to compensate farmers who cannot sell their cattle and pigs because the plants in Columbus Junction and Tama are closed.

Earlier this week, Congressman Steve King accused the meatpacking industry of manipulating prices and he called for a federal investigation.