You are here: Home / News / Reynolds says no timeline yet for reopening Iowa businesses 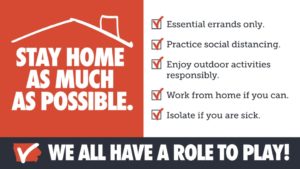 Governor Kim Reynolds says she will use a phased-in approach as she lifts the limits she’s placed on public gatherings and business activities – but she’s not giving a timetable for when she’ll announce her decisions.

“I know that the possibility of getting life back normal sooner rather than later is what hard-working Iowans want and it is absolutely what I want, too,” Reynolds said during her daily news conference.

But Reynolds said the state has not yet started to see a consistent daily decline in the number of COVID-19 cases and she’s not ready to announce when her orders may be lifted. Iowa bars and restaurants have been closed since noon on March 17th, although take out and curb-side service is allowed. Fitness centers, hair salons, and a variety of other businesses were later added to the closure list that’s currently in effect through April 30th.

Reynolds said the speed at which testing capacity can be expanded in the state is another factor in when businesses may be allowed to reopen.

Reynolds said the plans she and her staff have drawn out for reopening the Iowa economy are in line with the approach President Trump discussed with the nation’s governors on Thursday. Reynolds is again hinting she may allow business activity to resume first in counties and regions of the state where confirmed COVID-19 cases remain low.

Earlier today Reynolds announced Iowa schools will not be allowed to reopen for classes in May.