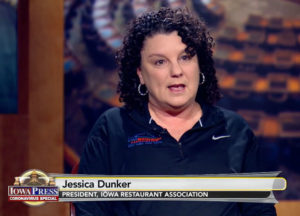 New data from the hospitality industry indicates total revenue for Iowa bar and restaurant owners has declined 80% since the governor ordered their businesses to close March 17th to prevent the spread of COVID-19.

During a weekend appearance on “Iowa Press” on Iowa PBS, Iowa Restaurant Association president and CEO Jessica Dunker said the industry is “absolutely in crisis.”

“If we reopen on May 1st, as we expect, 10 percent won’t open. If that moves to June 1st, we’re expecting 18 percent not to open,” Dunker said. “And if that’s pushed out to July 1st, we expect 25 percent will not reopen.”

The governor’s current proclamation on bar and restaurant closures is set to expire April 30 and Reynolds has not yet indicated if that may be extended. Carry-out and drive thru food and beverage service has been allowed, including the sale of alcoholic beverages, but Dunker indicated 70% of the state’s bars are completely closed.

About 40,000 of the Iowans who’ve filed for unemployment had jobs in Iowa restaurants and bars. Dunker said part-timers and high schoolers are not counted in that tally, so the total number of laid off workers is approaching 75,000.

“We’re just continuing to be hopeful with social distancing, we might be able to have some level of openings May 1st,” Dunker said.

Dunker’s organization is lobbying federal officials for changes in the “Paycheck Protection Program” which turns the loan into a grant if the business uses the money on payroll. Dunker said that’s just unrealistic for bars and restaurants that were ordered to close.

“And so while restaurants and bars will have the ability to apply for those PPP loans, we won’t get them forgiven,” Dunker said. “We are going to be taking on debt as an industry in a time when we are least able to repay it.”

There were nearly 63-hundred restaurants and drinking establishments operating in Iowa before the closures ordered on St. Patrick’s Day, according to the Iowa Restaurant Association’s website.