You are here: Home / News / Crews getting ready to cap off I-74 bridge from Bettendorf to Moline 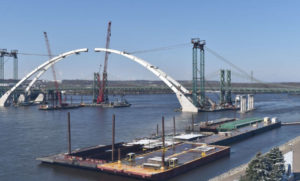 Work is nearing completion on I-74 bridge.

In another week or so, crews will install the final piece atop the Iowa-bound arches for the new Interstate-74 bridge.

The $1.3 billion project is underway on the Mississippi River between Bettendorf, Iowa, and Moline, Illinois. Danielle Alvarez, project manager at the Iowa DOT, calls that final piece the “keystone” and workers will assemble its two ribs and two struts before installation.

“They’ll actually pull back on the stays that we have supporting the arch and then they’re going to install some other temporary instruments to spread the two ends of the arch apart to receive the keystone,” Alvarez says. “It’s in a more confined area and it’s best constructed to put all four of those together and fly it up as one single piece.” 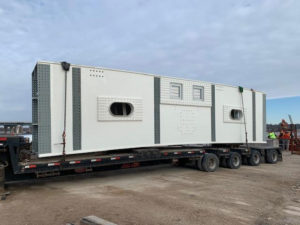 The keystone itself will be almost 38 feet long and it will close the top of the arches.  “We’ve got some preparation to do before that would go in the air,” Alvarez says. “We’re going to have to put up some temporary contraptions to help us spread out the ends of the arch to receive the keystone and some more preparatory work similar to what we did with the stays as we progress with erection over the rest of the arch.”

On the Illinois-bound side, Alvarez says a crew has completed milling and painting the four large piers for the second set of arches. The goal is to complete the Iowa-bound bridge and open it to traffic in the second half of this year.