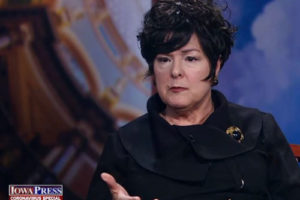 The director of the Iowa Economic Development Authority says her agency has been largely focused on big business expansion projects, but Debi Durham says that’s about to change.

“I’m going to propose to the legislature that we do a revolving loan fund for Main Street businesses,” Durham said this weekend on “Iowa Press” on Iowa PBS.

Durham isn’t ready to say how large she’d like the fund to be, but she’s asked the state’s bankers if they’ll manage the loans for businesses in Iowa’s rural communities.

“We think that’s the best way to do it because they have the relationship,” Durham said. “It’s ready, so it’s just a matter of when the legislature convenes, presenting something to them.”

Earlier this month, Durham’s agency distributed $24 million in state grants to hundreds of small businesses, but nearly 14,000 business owners had applied. As she announced the grants that had been awarded, Durham called small businesses the backbone of Iowa communities.

Beyond the addition of a small business loan fund to the state economic agency’s portfolio, Durham plans to ask lawmakers to financially support other programs aimed at Iowa’s small business sector.

“Absolutely you are going to see us step up in a bigger way than we have before, because as you know we ten to play with the ‘High Quality Jobs’ (program) is a big business initiative,”Durham said on Iowa PBS. “We’ve had our ‘Main Street’ and our ‘Targeted Small Business’ (programs) but they’re very small in comparison, so you’re going to see us have a totally different focus.”

The 2020 Iowa legislative session is currently suspended, but lawmakers must reconvene at some point to at least debate and pass a spending plan for the 12-month state budgeting year that begins July 1st.