The pandemic forced the cancellation of the Drake Relays, but Drake University’s Beautiful Bulldog contest continued and was decided by online voting via Facebook on Tuesday.

The winner is Hulk, a three-year-old English bulldog owned by Heath and Justine Johnson of Jewell. Justine Johnson says her pooch coming out the victor was a tremendous surprise and honor as Hulk became the top vote getter with just seconds to go in the canine competition.

“We were jumping up and down,” Johnson says, laughing. “It was crazy. It was like we really were running a race. It was the last two minutes, literally, that he pulled ahead, so a lot of adrenaline.” More than 16,000 voters took part in the contest, which has been a Drake tradition for 41 years. 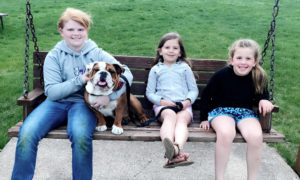 Hulk and his family.

Johnson was asked about Hulk’s response to winning the high honor. “He is excited even though, I don’t know if you watched the news but he was kinda’ sleeping during his interview,” Johnson says. “He had a lot of excitement going on yesterday.”

Hulk will be the mascot for the Des Moines university for the next year. A total of 150 bulldogs entered the contest with the number narrowing to 32 in the final phase. Tuesday was National Bulldogs Are Beautiful Day.