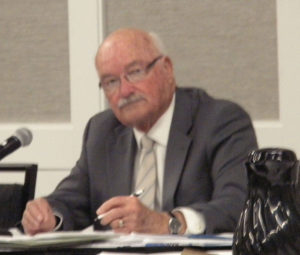 Two long-time members of the State Racing and Gaming Commission are retiring from the board when their current terms expire at the end of this month.

Carl Heinrich of Council Bluffs and Jeff Lamberti of Ankeny each have served nine years on the body that regulates gambling in the state.

Racing and Gaming Commission administrator Brian Ohorilko spoke about the two during the recent commission meeting.
“Their patience, vision, and integrity, perspective, fairness, and impeccable judgment have resulted in sound, thoughtful, and consistent decisions — which have generated universal respect — no matter the outcome,” Ohorilko says.

Heinrich is the former president of Iowa Western Community College.  He talked about the experience during the recent IRGC meeting.  “It has been an extreme pleasure to serve on this commission,” Heinrich says. “I have to admit when I was first appointed I was a bit apprehensive — because I really did not know the industry well.”

He served during a time when the IRGC dealt with many high-profile issues. “I had to learn what was expected of me and to make decisions that I never thought I would make,” Heinrich says. 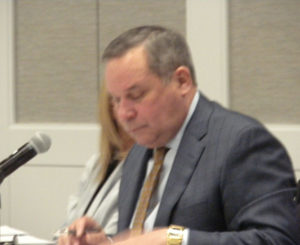 Jeff Lamberti listens to a presentation at an IRGC meeting.

Lamberti is an attorney and businessman who served in the Iowa Legislature before joining the commission. “It’s been a very interesting experience, I am glad I had the opportunity to serve. Nine years is a very lengthy time. I think turnover is good,” Lamberti says.

He says his time on the commission was eventful. “During the nine years I think I got to do just about everything…in terms of people seeking expansion to basically putting a license up for bid in Sioux City — to now sports gaming,” according to Lamberti.

Many of the issues were controversial — and he says none was tougher than deciding on new gambling license applications. “By far that’s the most difficult decision we have to make. Because it is not only the time and the work and the studies, the communities are very passionate about this, they invest a lot of their time, their effort, their money,” according to Lamberti. “And we take it very seriously You may not like how we vote — or you may like how we vote — but rest assured, we put our time in.”

Lamberti says he thought he had seen everything he could when he decided to step down from the commission. And now says he knows that is true after watching the coronavirus pandemic force the closing of all 19 of the state-licensed casinos.

Last week’s meeting was their last on the IRGC. A recognition of the two is planned at the July meeting if commissioners are again able to meet in person.