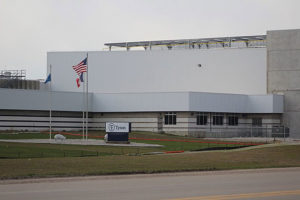 Tyson is closing its plant in Waterloo for cleaning.

Tyson Foods is closing its pork processing plant in Waterloo until further notice.

Tyson officials announced in a news release today that the company plans an indefinite shut down of operations at the plant this week and that affected employees will be paid while the plant is closed.

Local and state officials have been pushing for the shutdown to allow employees to be tested and crews to deep clean the facility to combat a coronavirus outbreak that’s blamed for causing nearly 200 of Black Hawk County’s 374 cases.

The Waterloo facility has around 2,800 employees, making it Tyson’s largest pork plant. Company officials did not indicate when the facility might reopen.