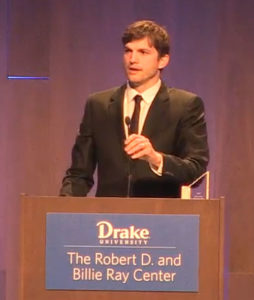 Hollywood star Ashton Kutcher, an Iowa native, had a role in linking state officials with the Utah-based companies hired to run the Test Iowa initiative.

Governor Kim Reynolds today said she first learned of the companies managing the “Test Utah” program from Kutcher as she and Kutcher were talking on the phone about his part in a public service announcement about COVID-19.

“He asked if I was familiar with what was happening with Test Utah and some of you know how it looked very promising and it looked like other states should potentially take a look at that,” Reynolds said during her daily news conference. “He knew one of the individuals that had been working on that, was a friend of his or just a colleague and knew him and so he said: ‘If you’d like, I’d be happy to connect the two of you.'”

Kutcher, in addition to starring roles in TV and movies, is a well-known investor in high tech start-ups, like Airbnb. The actor’s publicist says Kutcher has not invested in any of the companies involved in Test Iowa. Reynolds said after she spoke with Kutcher, her staff reached out to officials in the state of Utah, to get background on their COVID testing program.

“We were able to start that conversation and ramp it up relatively quickly,” Reynolds said.

On April 14th, the State of Iowa signed a $26 million contract with the Utah firms to set up drive-through sites to test Iowans for COVID-19. It was a “no-bid” contract, meaning other firms were not invited to compete to be the state’s testing contractor. Reynolds said Utah’s program addressed the need to “significantly” increase the number of tests done per day and manage information about COVID cases.

“I was very intrigued with the capability that it provided,” Reynolds said.

The “slow launch” of Test IOWA is this weekend in Des Moines, in a parking lot where nearly 250 Iowans have appointments to get drive through COVID-19 tests.

Minnesota officials have partnered with the Mayo Clinic in Rochester and the University of Minnesota to expand COVID-19 testing there. Reynolds indicated her administration is working with the University of Iowa and Iowa State University on the next phase of testing — serology or blood tests that can determine if a person has had COVID-19 and may be immune to the virus.