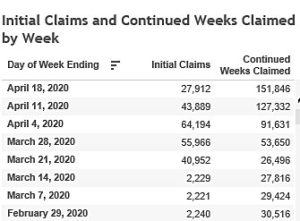 The agency says there were 27,912 first-time unemployment claims filed last week. That is a little more than half the number of claims filed in the previous week — and it is the second straight week where claims have dropped after hitting a record of 64,194.

Manufacturing has the most claims at 5,143 health care and social assistance had 3,985 and the retail trades saw 3,307.

IWD says there were nearly 152,000 continuing unemployment claims during the week.