You are here: Home / News / May 15th new target date for 2020 Iowa legislature to reconvene 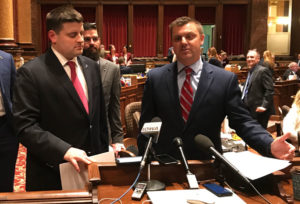 Two dozen members of the Iowa legislature met by phone this morning and voted to keep the 2020 legislative session suspended until May 15th.

Key leaders say it’s hard to plan in the midst of a pandemic and Senate Republican Leader Jack Whitver of Ankeny acknowledged the date for reconvening could be moved again.

“At some point, we have to get in and get our work done,” Whitver said during the Legislative Council’s meeting. “I hope we’re able to get that done in a short amount of time when we do come back and hopefully that is relatively soon.”

Whitver said it’s difficult, though, to draft a state budget plan right now, partly because it’s not clear how all the emergency federal aid being sent to the state may be spent.

Senate Democratic Leader Janet Petersen of Des Moines urged Republicans who control the legislature’s debate agenda to take steps so the public can watch all of the legislature’s proceedings online rather than in person.

“Clearly, we’re facing a health crisis like our state has never seen before,” Petersen said, “during our lifetime, at least.”

House Speaker Pat Grassley, a Republican from New Hartford, said the goal is for the 2020 Iowa legislature to reconvene for hours, not weeks.

Democrats urged Republican leaders to consider delaying the legislature’s return to the Capitol until there’s been a two-week decline in COVID-19 cases in the Des Moines area. Democrats also suggested copying other state legislatures which have used larger venues that give lawmakers enough space to maintain social distancing