You are here: Home / News / Governor says lag in COVID test results to be resolved this weekend 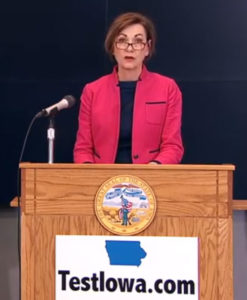 Governor Kim Reynolds has announced 740 new cases of COVID-19 have been identified in Iowa, a significant spike in positive cases from testing in areas of the state where virus activity is high.

“In the last week alone, we have deployed ‘strike team’ and sent tests to long term care facilities, manufacturing facilities, and the Iowa Veterans Home so that essential workers could be tested,” Reynolds said late this morning during her daily news conference.

Many Iowans who have been tested have not yet received their results. The governor acknowledged there is a backlog, but she said all of the past week’s results will be revealed this weekend.

“We opened ‘Test Iowa’ sites in Des Moines and Waterloo,” Reynolds said, “and this has generated a high volume of tests coming into the State Hygienic Lab in a short amount of time.”

When the state lab first began processing tests in March, the Centers for Disease Control had to approve the methods being used. Reynolds said part of the current backlog is due to getting CDC approval for the way “Test Iowa” results are being processed.

“I want to assure Iowans that this is a short-term issue, while the lab is transitioning to not only a higher volume of tests on an ongoing basis,” Reynolds said, “but as they work through the validation of the ‘Test Iowa’ process.”

A spokesman for Reynolds said some Test Iowa results have been included in the daily reports of coronavirus cases. Reynolds said the Hygienic Lab in Coralville is operating three shifts, to process tests around the clock.

“I also want Iowans to know that because of the large number of tests we’ve conducted recently, we do anticipate the overall numbers that will be reported this weekend, they may be higher than usual — as we’ ve seen in today’s numbers,” Reynolds said, “so please keep in mind that a high volume of were among essential workers in communities or facilities where virus activity is high.”

Eighty-five percent of the 740 positive test results reported today came from the 22 counties where the governor’s COVID related restrictions remain in effect. The vast majority of the cases came from just four counties — Black Hawk, Woodbury, Polk, and Dallas Counties.