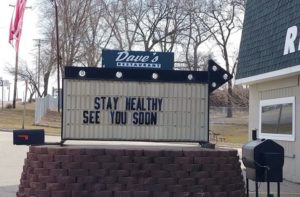 Restaurant owners in 77 Iowa counties had the option of reopening dining areas to half capacity last Friday.

“When the governor said that we could reopen on May 1st, it totally took me by surprise. I would have been 99% positive she was going to extend that proclamation for two more weeks,” says Dave Holschlag, owner of Dave’s Restaurant in Charles City.

He struggled with the decision.

“I really had to do a lot of thinking. How are we going to do this? And my first response was, well, we have to open because we’re allowed to open, we’re supposed to open, people want a place to go eat and they’ve been cooped up for a month and a half and there’s the mental side of that,” he says. “People need to get out and get some fresh air and some good, healthy food.”

Restaurants allowed to reopen cannot offer buffets or salad bars and no more than half of seating capacity may be filled. Holschlag has brought all his employees back.

“There’s more sanitizing and more work to really ensure the safety of the employees and our customers,” Holschlag says. “….We’ve never gone through this before. We don’t know how it’s going to go. We’re hoping it’s going to go well We’ll know more a week from now.”

Yolanda Hicalco, the manager of Plaza Mexico in Charles City, says they’re sticking with carry-out only.

“It would be very chaotic, honestly, for us to open at 50% while still trying to get to-go orders, carry-outs and things like that going,” she says.

The Charles City restaurant completely closed for one week in March, but then all employees came back to work.

“We have everything set up right now in our kitchens and our waiter stations to serve carry-out and try our best to do that well,” Hicalco says. “It’s maintaining that distance between customer and employee. It’s giving our employees a job still.”

Hicalco says they’ve been pleasantly surprised at the high volume of their carry out business.

“We’re just as scared as everybody else about everything,” Hicalco says.

Hicalco says they’ll reconsider opening the dining area of the restaurant on May 15th or May 27th.