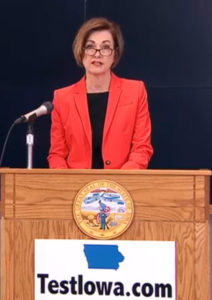 Drive-through “Test Iowa” sites have been established in Des Moines, Waterloo and Sioux City — three “hot spots” for COVID-19 activity. Under current arrangements, Reynolds says it appears the federal government will cover at least 75 percent of the costs of COVID-19 testing, so the state would have to come up with the money for the remaining 25 percent.

“Then in addition to that, there’s also just some specific funding through the CARES Act for testing, because they’re really wanting states to ramp that up,” she says.

Reynolds is lobbying federal officials to allow the State of Iowa to use money allocated from the CARES Act to cover all the costs associated with COVID-19 testing in Iowa. That includes pay for the laid-off nurses and health care workers from local hospitals who’re being hired to work at the state’s drive-through testing sites in Des Moines, Waterloo and Sioux City. Volunteer nurses and some state employees are also testing Iowans passing through in vehicles.