You are here: Home / News / Deadline nears to sound off about plans for Interstate 80 bridge at Le Claire 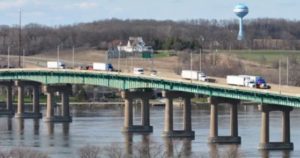 Public comments are being taken through today as the Departments of Transportation in Iowa and Illinois try to decide whether to build a new Interstate 80 bridge between Le Claire, Iowa and Rapids City, Illinois.

Consultant Tony Pakeltis says the span over the Mississippi River at the Quad Cities is already more than 50 years old.

“As bridges get older, issues regarding the condition of the bridge become more frequent and the cost to maintain the bridge increases,” Pakeltis says. “Additionally, this bridge does not meet current standards in terms of shoulder width and it’s not feasible to widen it.”

That element of the bridge is especially problematic to motorists who have engine trouble or blow a tire while crossing over the river.

“Beyond not meeting current design standards, the lack of shoulders creates additional issues,” Pakeltis says, “so when there are crashes or stalled vehicles on the bridge, these incidents can easily shut down both lanes of travel.”

The Illinois DOT is the lead agency for the I-80 bridge planning study. Becky Marruffo, from the Dixon office, says the project area includes the bridge and nine miles of highway from just east of Middle Road in Bettendorf to the I-88 interchange in Illinois.

“We’re sharing costs between the states as well as with the Federal Highway Administration,” Marruffo says. “So, as of the last published program for the Illinois DOT, this project is funded all the way through construction.”