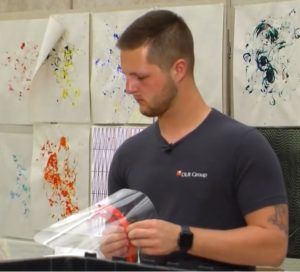 As his college career ends, an Iowa State University architecture major is being kept very busy, right up to graduation day, cranking out personal protective equipment, or PPE, for area hospitals and front-line medical workers.

Weeks ago, ISU senior Tyler Beers and several of his classmates were asked by Professor Shelby Doyle to step up when the coronavirus pandemic presented a challenge.

“When this all happened, we got a bunch of information from Shelby about PPE being short throughout the state and throughout the country,” Beers says. “She brought this to us and said, ‘Hey, if you want to help on this, that would be amazing,’ and there was not a single one of us that turned it down.”

The students are focused on making plastic face shields in ISU’s Computation and Construction Lab and they’ve been at it since Spring Break.

“Initially, Shelby said, ‘I want to make one- to two-thousand of these,’ and I thought, ‘That’s crazy. There’s no way we’ll be able to do that,’ and now we’re at almost a thousand and I wonder if that’s enough and are we going to end up making more,” Beers says. “The goal is to keep doing it until we run out of material. As long as we don’t run out of material, we’ll keep going.”

While adjusting to doing all of their college course work online, the team of eight students has been working on the face shields 40 to 50 hours a week. Beers says his days in Ames are quickly coming to an end — and things haven’t exactly turned out as he’d planned.

“You get to year one and two and think, ‘Oh, my God, this is never going to end,’ and you think it’ll be forever,” Beers says. “Then, you get to that fifth year, a month away (from graduating) and then you get told you can’t walk across the stage. It’s sad.”

While he’s disheartened he won’t see most of his friends again before he leaves, it’s understandable and he knows everyone’s coping with those same feelings. Still, the Ainsworth native says the experience of working in the lab to round out his days in Ames has been valuable and rewarding.

“The first picture we got of somebody wearing all of the PPE we’d sent out was just an amazing feeling,” Beers says. “Just seeing that made it all worth it and just knowing we’re helping as much as we can. I wish we could help more.”

After graduation, Beers will head to Fort Leonard Wood in Missouri to start basic training as a member of the U.S. Army Reserves.