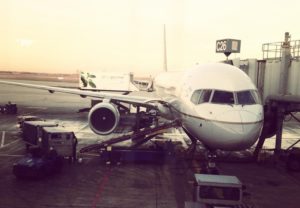 An Iowa native was one of three Marines who prevented a potentially dangerous situation from escalating on an international flight early Monday morning. Captain Daniel Kult, a 2011 Coon Rapids-Bayard graduate, was on a flight from Japan to Texas when he became aware of the disturbance.

“I was actually like half-asleep, watching a movie, had my headphones in, started hearing some kind of like commotion…so it took me kind of a moment to kind of realize what was going on,” he says. “I took my headphones out and then that’s when I definitely heard there was someone screaming from one of the bathrooms in the middle of the plane.”

According to Kult, the shouts from the passenger were clearly threatening and he quickly joined two other Marines to assist the flight crew however they could. The man subdued in a seat, Kult says he and the other two Marines kept watch as the flight was diverted to Los Angeles.

“Off and on he’d have some outbursts here and there,” Kult says, “and there were a couple of other times we had to work on re-restraining him because he slipped out of the duct tape that we used on his legs just because he was getting sweaty and moving his legs around, so he was pretty active throughout the hour it took to land at O an get the authorities on board.”

The passenger was taken into custody not long after landing and taken to a hospital for a mental health evaluation. The plane then took off for the flight’s original destination — the Dallas-Fort Worth airport. Kult is now back on base at Camp Lejeune in North Carolina, but on a 14-day quarantine following international travel.