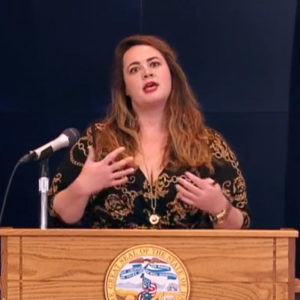 There’s confusion about whether the state’s medical director will be a member of the federal coronavirus task force.

On Wednesday, Dr. Caitlin Pedati went to Washington, D.C. with the governor for meetings in the White House. Trump complimented Pedati, saying he’d love for her to be on the task force. On Thursday, during a news conference in Johnston, Governor Reynolds mentioned Trump’s remark.

“I think Iowans should be proud,” Reynolds said. “I certainly am.”

Jennifer Jacobs of Bloomberg News is reporting, however, that Pedati will be appointed to “a subcommittee of sorts,” but not the actual task force. President Trump mused about disbanding the task force earlier this week, but has decided to keep it. Vice President Mike Pence, who has been leading the group, is scheduled to visit Iowa Friday.

Pence will host a roundtable discussion about the security of the U.S. food supply early this (Friday) afternoon. The meeting will be held at Hy-Vee headquarters.