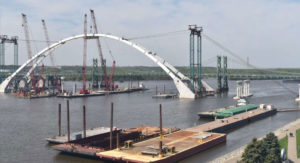 Earlier this week, a huge crane hoisted the final piece of the new, Interstate-74 bridge arch into place. It’s the Iowa-bound side of the bridge over the Mississippi River between Moline, Illinois and Bettendorf, Iowa.

Danielle Alvarez, at the Iowa Department of Transportation, says construction workers are still busy connecting the 38-foot-long keystone to the rest of the arch segments with thousands of bolts. “We put the piece in, that was the exciting part for us all to look at and watch on the webcams,” Alvarez says. “Now, we’re starting the more detailed phases that don’t look as glamorous. There’s a process of installing those bolts and how they adjust the stays and the other temporary pieces before we’re all said and done.”

The crane will continue to support the keystone until workers complete several more steps.  “We’ve got over a thousand bolts per corner so we’ve got several hours of stuffing bolts and adjusting the temporary works to bring those two sides of the arch together to mate those final connections,” Alvarez says. “That’s what we’re going to be doing ’round the clock.”

Temporary support structures, such as the tall towers on each end of the arches, will be removed and then re-used to build the Illinois-bound bridge. Construction began nearly three years ago. The goal is to complete the Iowa-bound bridge and open it to traffic later this year.