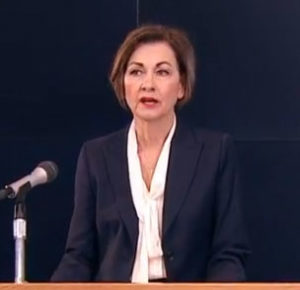 Governor Kim Reynolds is adopting a “modified quarantine plan” after potentially being exposed to someone who tested positive for COVID-19.

The governor visited the White House last Wednesday and hosted Vice President Pence in Iowa on Friday. A member of Pence’s staff is infected, so the governor late this morning said she’s taking precautions, though she says she had no direct contact with the staffer.

During Reynolds’ news conference this morning, reporters asked questions by phone and the briefing auditorium at the State Emergency Operations Center was nearly empty.

“My temperature will be taken before entering the building. I’ll be tested daily. I was tested this morning and it was negative,” Reynolds said, “and while here I’ll practice social distancing and wear a mask when interacting with others, which will be minimal interaction.”

The governor said she’s healthy and feeling good and has no symptoms of the virus and most of her staff will be working from home. Reynolds indicated she’ll make an announcement Tuesday about what businesses may be allowed to reopen later this week and what restrictions may be extended through month’s end.