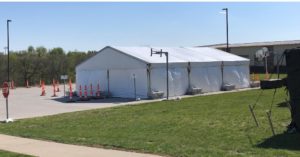 A western Iowa city that’s home to two meatpacking plants is the latest location for one of the “Test Iowa” drive-through sites to screen residents for COVID-19.

Captain Sam Otto is spokesman for the Iowa National Guard task force that set up the site in Denison.

“We have personnel that are experts by now in setting these up and they’re very professional,” Otto says, “and they got it accomplished really quick.”

Test Iowa sites have been set up in Des Moines, Waterloo. Cedar Rapids and Sioux City. Otto says it’s up to the Iowa Department of Public Health to decide how long the Denison site will be open.

“We’ll just have to play it by ear and see what the need and the capacity is,” Otto says.

Soldiers from an Iowa Guard unit from Boone along with air guard soldiers based in Sioux City and Des Moines were deployed to set up the site in Denison. Guard soldiers will continue to serve at the Denison location, directing traffic through the drive-through lanes set up for people who did the “Test Iowa” online assessment and got an appointment for a COVID-19 test. The state is hiring medical personnel and recruiting volunteer nurses to conduct the tests. Guard soldiers transport the test kits to the State Hygienic Lab for processing.