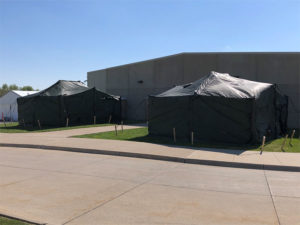 Another Test Iowa site is opening in Ottumwa. This is the site in Denison.

Governor Kim Reynolds today said 9,400 employees of 14 different Iowa manufacturing and meat processing facilities have been tested for COVID-19. Another 1,300 staff members who work in 115 Iowa nursing homes have been tested.

“Expanding testing in a targeted way such as this helps us confirm how the virus is spreading and while it drives our positive case count up for the short term,” she said, “more importantly it helps inform us how to effectively manage virus activity for the long term.”

The state has confirmed COVID-19 outbreaks in 32 long term care facilities as of this morning. Last week, officials announced outbreaks had also been confirmed at four meatpacking plants in Columbus Junction, Tama, Waterloo and Perry and the wind blade factory in Newton.

At least three residents of a nursing home must test positive for the virus to have the facility listed as having an outbreak. At least 10 percent of workers in a manufacturing or food processing facility must either be absent or have tested positive before an outbreak is publicly declared by the Iowa Department of Public Health.

Reynolds said there appears to be reduced case counts in eastern Iowa hot spots, while virus activity is increasing in central and western Iowa counties.

“We’ve also been monitoring an increase in virus activity in Crawford County where we opened another ‘Test Iowa’ site on Saturday and are testing employees against at long term care facilities, manufacturing facilities and throughout the community,” Reynolds said during her daily news conference.

A “Test Iowa” site is now open in Davenport and one will be opening in Wednesday in Ottumwa — for a total of seven drive-through testing locations. An average of about 3000 COVID-19 tests results were announced each day last week. Reynolds said Friday the state will be able to process 5000 daily, but she has not indicated when that goal will be reached.

Iowa is among the half-dozen states getting a shipment of Remdesivir, the drug that’s recently been approved as a treatment for COVID-19 patients. State public health officials will decide how it’s distributed to pharmacies and provide advice to doctors about prescribing it.

“Based on who benefits most from the drug,” Reynolds said, “and we want to make sure that when we’re administering it, that the physician is connected with someone that has had experience with the drug.”

Iowa received 400 vials of the drug. The University of Iowa Hospitals and Clinics participated in clinical trials of Remdesivir. The trials indicate the drug may help reduce the number of days a COVID-19 patient spends in the hospital.