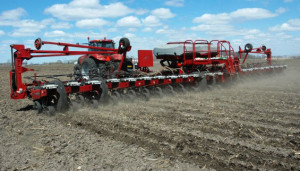 The planting season continues to move rapidly ahead following a year where farmers had to sit and wait for things to dry out.

The weekly crop report from the U.S. Department of Agriculture shows 91% of the corn planting is done — up from 78% last week. The report says 71% of the soybeans were in the ground — an increase from 46% the week before.

Iowa State University Extension Field Agronomist Paul Kassel says it’s been decades since farmers have the conditions to be able to work at this pace. “It was a record soybean planting in Iowa. I think the north-central crop reporting district had 66% like a week ago which is way ahead of schedule, so yeah, so kind of a neat deal to have that situation after the last couple of springs,” Kassel says.

The only downside has been a cold snap that spread across the state last week. Kassel says he has not received any reports of frost damage — but the cold is slowing the growth of the one-third of the corn crop that has already emerged from the ground.

“Kinda losing out here on leveraging our early planting. We like to plant early to kind of extend the growing season and increase the amount of time during the summer months when we can fill the kernel and the pods that’s probably the overall bigger concern,” according to Kassel.

Northwest and north-central Iowa also lead the way in soybean planting with less than 20% remaining to be planted.

(Pat Blank of Iowa Public Radio contributed to this story.)