You are here: Home / Business / Mary Jo’s Hobo House in Britt fights back from coronavirus shut down 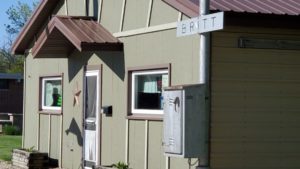 An iconic breakfast and lunch restaurant in northern Iowa is starting to hit its stride again.

Earlier this month, Mary Jo’s Hobo House in Britt reopened its dining room under specific guidelines set down by the state. Owner Mary Jo Hughes says this has been a tough spring. “I’m not going to lie. It was bad,” Hughes says.

“I’ve been in business for 26 years and I’ll tell you, I’ve never been through anything like this before. It was worse than when we had major snowstorms, we’d have more customers than we did through this.”

Hughes says she had to be creative and innovative — and almost go into survival mode to get through the near shutdown the governor ordered during the pandemic. “I had to put my waitress, which is my sister, on unemployment, so that would free that money up so I could go on and then I ran it myself,” Hughes says. “I would be the one to answer the phone, cook the order, pack the order, ring up the order and I did that every day because you went from having, you know, like a restaurant full of people in the morning to maybe seeing maybe Monday through Thursday four customers — a day. That is it.”

Hughes says there were a few bright spots. Her weekend business was fairly steady. “My Friday, Saturday and Sunday were really good because we had a lot of breakfasts during those days,” she says, “and then we even delivered, so that helped.”
Her nephew came from nearby Thompson to deliver to customers in the Britt area. Still, the pandemic and resulting near shutdown have taken its toll.

“Everything that I had saved over the winter because I had a good January, February and the first part of March going — it was probably one of the best winters we had had — and all that money is gone,” Hughes says. Hughes began to worry about the future of her business. She applied for financial help from the state and federal government, but got nothing. She went from making over 600 pots of coffee in one month to just eight.

“There were days I thought: ‘Why don’t I just lock it up and forget it?’ but then you still have your electric bill coming. You still have your insurance you have to pay,” she says, “so whatever money I could take in, that would help pay those bills.” Hughes is now focused on getting her customers base back to what it once was, but she knows what she faces in this challenge.
“I don’t want this to be my new normal. I want to have my old normal back,” Hughes says. “You know, all we can do is we open our door and put out a sign that says ‘OPEN’ on the street — and hopefully they’re going to come back.”

Britt is home to the National Hobo Museum. The community’s annual “National Hobo Convention” is scheduled in August, to celebrate the migrant workers who traveled the country, hopping on and off rail cars.