You are here: Home / Recreation / Entertainment / State campgrounds and reservation system now up and running 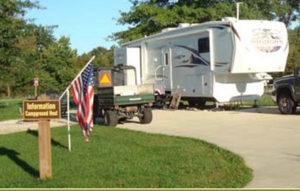 State campgrounds reopened this past weekend and the head of the Department of Natural Resources Parks Bureau says things went pretty well.

Todd Coffelt says it was evident when the opening time hit that many people were itching to get outdoors. “People started to trickle in at eight o’clock just like the announcement. Some people must have their campers already loaded and ready to go — because being able to be there at eight o’clock — that’s something,” Coffelt says.

He says this is a start to getting things back to normal. “I would say on average most of the campgrounds were 25 to 30 percent full,” according to Coffelt. “We wanted everyone to be there, but the weather wasn’t the 80 degrees we had the weekend before and the sudden change in travel plans is always a challenge.”

Coffelt says people at the campgrounds have been following the social distancing guidelines in most cases. “For the most part, folks are doing a pretty good job. We have general reminders — our goal is to educate folks not to enforce laws…if we do see a group most of the time it is temporary and we don’t really have push back from anybody,” Coffelt says. in the campgrounds when we open them up, we are limiting access to the campgrounds to just the registered campers.”

The registration system for campgrounds is now open again and Coffelt says they had some three-thousand people already registering through Monday afternoon. “Seventy-five percent of the sites in our campgrounds are reservable. There still is walk-in traffic — but as we near the Memorial Day holiday — it is a bigger risk the closer you get,” he says. “People are starting to look forward now that we know the campgrounds are open — they obviously have taken advantage of the convenience of making a registration.”

Coffelt says you should always check campground availability before heading out. He says you can call ahead or check the websites beforehand. Coffelt says they are still working on the parks and sometimes projects will impact the availability and access to sites.

You can go to www.iowadnr.gov to find out about the availability of campsites or to make a reservation.