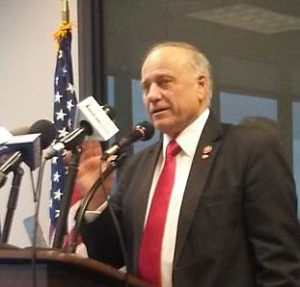 Congressman Steve King has been saying for the past two weeks that he has an agreement with the Republican leader in the U.S. House to get his committee assignments restored,  but an Ohio congressman who’s on the leadership team today said King “will not be serving on any committee.”

House GOP leaders removed King from committees last year. It came shortly after a New York Times article quoted King asking why the terms white supremacy and white nationalism had become offensive. This is what King said on April 27.

“Kevin McCarthy and I have reached an understanding,” King said on KSCJ Radio, “and the only barrier in the way to putting back all my committees, perhaps incrementally as there are openings that can be created, is to get a formal meeting of the Steering Committee because they’re officially the ones that make that decision.”

King is seeking a 10th term in the U.S. House and faces four Republican challengers in the June Primary. He has repeatedly said he was misquoted and King chastised his opponents during a forum in Spencer on Monday night.

“You’re running on The New York Times and you’re running on no committee assignments,” King said in forum broadcast on KICD Radio. “Can anybody stand up and say it’s what I said or did that caused that to happen? That’s not on me. That’s on the people that made that decision and the ones that need to rectify it and you all should have stood up to defend me on that and you were nowhere to be found.”

House Republican Leader Kevin McCarthy said in January of 2019 that King’s remarks to the New York Times were not the first time he’d made offensive comments.

This evening, McCarthy’s staff released a statement to The Hill, saying King had not been promised reinstatement on House committees, but would be allowed to make his case to the group of GOP leaders who decide committee appointments.

Ohio Congressman Steve Stivers, a member of the House GOP Steering Committee, today said in a written state he “will not allow hate and bigotry to influence the legislation passed in congress” and King will not regain appointments to committees.

Two weeks ago, King said his lack of committee assignments is an injustice that must be corrected immediately, “especially in the middle of this crisis that we’re in right now.”

King, in a written statement, called Stivers a “Never-Trumper” who has just one vote on the House GOP Steering Committee.

Stivers is “known for his singular inability to discern fact from fiction,” King said. “…No respectable Republican believes the New York Times.”