You are here: Home / Agriculture / Senators Ernst and Grassley call for more support of hog producers 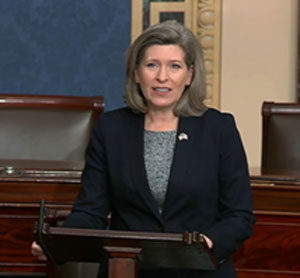 Iowa’s two U.S. senators want more money pumped into programs to compensate hog producers who are forced to euthanize herds due to the pandemic.

With some meatpacking plants closed, processing capacity is down by 20- to 40%, or more. Senator Chuck Grassley says the pork industry has lost more than $5 billion already, though he’s not calling for a specific amount to be included in the legislation.

“Usually the bill says ‘such sums as may be necessary’ and the appropriators would make that final decision,” Grassley says. “The fact that I haven’t mentioned a specific dollar figure is only because it’s kind of an unknown at this point.” Grassley notes that the CARES Act provided more than $24 billion for grain farmers, specialty crops and livestock producers who were suffering losses.

“This money that is already available, six weeks ago, was anticipating just low prices because of the pandemic,” Grassley says. “Nobody talked about depopulating herds at that time.” In a letter to Congressional leaders signed by Grassley and several other senators, they say: “The crisis is immediate. Pork producers send to market over two million pigs each week. If 20% of processing is idle, that means somewhere around 400,000 animals per week must be disposed of in some manner other than processing.”

Iowa Senator Joni Ernst says farming communities are in an economic crisis, especially hog farmers who are faced with the prospect of euthanizing their animals.

“It’s very hurtful, I think for all of us, especially for those of us in leadership that are really crying to be heard broadly across the United States with our colleagues as to what our American farmer and rancher is going through,” Ernst says. Ernst made her comments last Friday during a forum with Vice President Mike Pence in West Des Moines.

Jen Sorenson, president-elect of the National Pork Producers, says of euthanizing hogs: “That goes against every farming instinct. We need significant help to support U.S. pork producers that generate more than 500,000 jobs and $23 billion in personal income across America.”