You are here: Home / News / Traffic picking up a little more on Iowa roadways 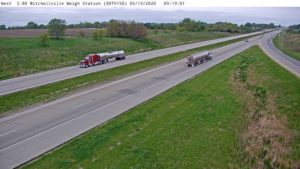 DOT traffic camera look at I-80.

An Iowa Department of Transportation planner says the drop in traffic on the state’s roadways brought on by the coronavirus is starting to ease up.

The DOT’s Stuart Anderson says peak drop in travel in the state of Iowa came last week. “When traffic was down 44% across the state,” Anderson says. He says the number of motorists out there then started increasing.

“Traffic has started creeping up again to the point where last week traffic was down by a third. So, it is slowly creeping back up on the system,” Anderson says. Anderson talked about the traffic during the Transportation Commission meeting Tuesday. The drop in traffic leads to a drop in gas and diesel purchases — and means less gas tax money to pay for highway repairs.

A little less than half of the funding goes to the state, with about a third to the counties and the rest to cities. Anderson says the lag in the collection of the fuel tax has been a little more than they expected and they won’t know for sure the total drop until June.