You are here: Home / News / Iowa restaurants mull math of reopening at 50% capacity 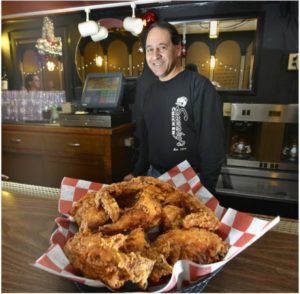 Restaurants may reopen Friday in 22 Iowa counties for inside-the-dining-room seating, but at half capacity.

“As it is right now, and things can change daily, when we go to 50% occupancy opening, I won’t reopen the restaurant,” says Dave Ferris, owner of Sneaky’s Chicken in Sioux City. “We will stay doing what we’re doing.”

Sneaky’s Chicken has been open during the pandemic — for customers who can pick their order up at the curb outside his restaurant.

“I’m hoping to change the curbside into a customer come in and carry out type scenario,” Ferris says.

Ferris says he’s “not second-guessing” the governor and he’s praising Reynolds for making tough decisions in the midst of a pandemic, but he says the math just doesn’t work to reopen his dining room under the state’s new guidelines.

“We seat about 80 people,” Ferris says. “Number one, we have to take the bar stools out because you can’t sit at the bar so now that takes us down to 72 people. We have to eliminate every other booth. We have seven booths, so we’ll eliminate three, leave four open. They each seat four, so that’s 16 and then you have to eliminate tables upfront, so if we’d get our occupancy to 30, we would be lucky.”

And it’d be far lower if some of his booths are occupied by a single diner or a couple, which Ferris says is more than likely. Ferris is trying to book some catering jobs for the summer and hoping business returns to something like normal in the weeks ahead.

“I talk to a lot of people in our industry,” he says. “….There are many, many people in really serious situations.”

Dave Ferris and his brother opened Sneaky’s 41 years ago and the restaurant is known for its “broasted” chicken that’s fried in a pressure cooker.

Restaurants in 77 of Iowa’s 99 counties were allowed to reopen at 50% seating capacity on May 1.