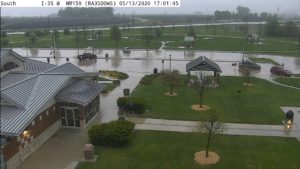 The Iowa Department of Transportation plans to release an updated proposal by the end of this month that reduces the number of full-service interstate rest areas targeted for closing from 11 to 8.

The DOT’s Brad Hofer says they used public input and did some more study of the rest areas and truck parking to come up with the revised cut list. “There’s several along I-29. There’s only a couple along I-35. There’s no closures recommended along I-80. And then there’s two aging sites on I-880 just north of Council Bluffs that are being proposed for closure,” he says.

He says they got a lot of public feedback after the original plan came out, which led to the decision to keep three rest areas open. “The two Osceola’s south of Des Moines — we heard some pretty substantial feedback on those — as well as the eastbound Davenport site. And because of that and kind of the spacing of those sites — we opted to keep those as ones that we are now going to keep,” Hofer says.

The new plan also goes from closing 16 parking only sites to only closing 10. Hofer says that decision comes after a survey of available truck parking. The six parking only sites that stay open will be upgraded. “Overall we are adding a net 247 additional truck parking spaces with those upgrades,” Hofer says. “Even with those closures, we are adding enough parking spaces to compensate for those ones that are lost — as well as adding 247 more.”

Hofer says the did a lot of study on the 38 rest areas to decide which ones close. “We did look at spacing, we looked at usage, we looked at age. There were I think about seven or eight criteria that we use to prioritize their criticality — I’ll call it that,” according to Hofer. Hofer says one of the things that people didn’t understand after the first survey is they will use the money saved from the closings to help maintain and improve the remaining sites.

“Those eight full-service sites we are proposing to close are all approaching 50 years in age. And then there ‘s 12 more aging full-service sites that will need to be upgraded in addition to those — and we are proposing on doing that between 2022 and 2033,” Hofer says. Travel patterns have changed and there are now more amenities available from the private sector along the interstates, but Hofer says many people like being able to pull off quickly and use the state rest areas.

“They’re very convenient, easily accessed, and well-maintained sites that make it easy for folks to take a rest,” he says. “What we tried to do with this study — some of the existing rest areas are oddly space along  the system — some of them are kind of a short distance between another one or a short distance between a big truck stop or another private service area. So what we tried to do is make it a little more evenly spaced out throughout the system.”

Hofer says they will release they hope to release the new proposal before the end of this month and get more input before bringing the final proposal to the Transportation Commission.