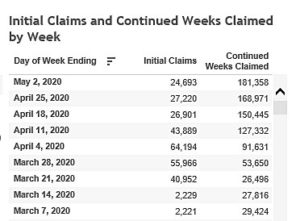 New state unemployment claims were at their lowest level last week since the coronavirus pandemic started.

Iowa Workforce Development says there were 16,735 new unemployment claims in the first week of May. That is down by almost 8,000 from the previous week — and it’s the first time the claims have been below 20,000 in three weeks.

Manufacturing saw the most new claims at 4,065 while self-employed and independent contractors filed 2,103 claims.

New unemployment claims have totaled nearly 287,805 in the last seven weeks. The peak came the week of April 4th, when there were 64,194.