You are here: Home / News / Test Iowa processing machines have been validated 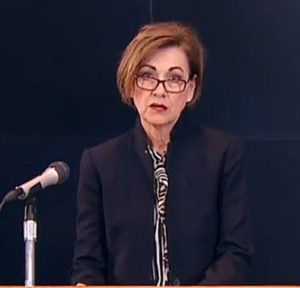 Staff at the State Hygienic Lab in Coralville have been using systems validated in March to process Test Iowa kits. In the past couple of weeks, more than 4300 Iowans have driven through Test Iowa sites to be screened for COVID-19. Reynolds indicated about 300 are waiting for their results.

“For those Iowans who have reached out to tell us that we’ve fallen short of meeting their expectations, we hear you,” Reynolds said. “Now that the lab has completed the validation process, we expect more tests will be processed more quickly and your results will be delivered on a timely basis.”

A Test Iowa call center will be established “in the next few days,” according to the governor.

“Staff experienced with the Test Iowa process can help answer your questions and your issues in a more timely manner,” Reynolds said.

The governor acknowledged 200 Test Iowa kits were damaged and The Des Moines Register reported some individuals have had difficulty scheduling another test. The Cedar Rapids Gazette has reported some Iowans are getting inconclusive test results.

“Those things are not unique to Test Iowa,” Reynolds said. “That happens with any testing process. Even through the State Hygienic Lab, who’s done a phenomenal job, when we sent some tests down to southwest Iowa, we had unfortunately 200 samples and we had to retest. These are some of the things that happen when you’re testing on a large scale like we are right now.”

Reynolds has lifted more of her closure orders, allowing more businesses — like hair salons and barber shops — to reopen this weekend. The governor said expanded testing capacity will allow the state to track viral flare ups, but Test Iowa’s promise of 3000 additional tests per day has yet to materialize after nearly three weeks.

The program is still ramping up, according to the governor, and it’s primarily focused on testing employees from certain workplaces. The other tests available through the State Hygienic Lab are still limited to people with symptoms or who’ve been around someone who’s tested positive.

“We want to make sure that if we would see a spike, that we would have adequate test supplies,” Reynolds said.

The Iowa Department of Public Health’s website shows another 386 COVID-19 cases have been confirmed in Iowa, bringing the state’s total to 13,675 cases. A dozen more Iowans have died from the virus. The state has had 318 COVID-19 related deaths so far and more than 400 Iowans were hospitalized for treatment of the virus yesterday.