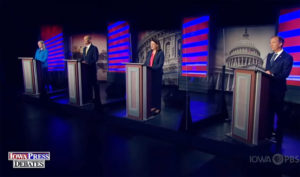 Des Moines businesswoman Theresa Greenfield said congress should ensure workers get paid sick leave and correct some of the problems with the Paycheck Protection Program.

“I think that our federal government has fumbled that football a little bit there in the previous CARES Act,” Greenfield said, “and the dollars haven’t gone to all the small businesses.”

Retired Navy Vice Admiral Mike Franken of Sioux City said there should be a sense of urgency during this pandemic, but he’s concerned about piling up debt.

“I believe we ought to get something from those bills that lead to a better tomorrow,” Franken said, “such as a broad infrastructure package or addressing the medical care or addressing those most impacted by this.”

Franken questions the $12oo federal payments to nearly all Americans, suggesting the focus should be on helping the unemployed. Kimberly Graham, an attorney from Indianola, said meat packing companies should be held accountable for putting workers’ health at risk.

“There is no burger, I don’t care how good it tastes, that is work anyone’s life,” Graham said. “…These owners of these plants knew what we all knew for a very long…that it spreads in close contact and yet they still had people right up next to each other with no PPE in some cases, no breaks to wash their hands, etc.”

“I support expanding and strengthening and enhancing the Affordable Care Act. We have all the tools we need there,” Greenfield said. “We need to add in a public option on top of that so that absolutely every Iowan, every American can get health care.”

“And ultimately bracing up Medicare,” Franken said. “…We ought to make this a birthright of Americans and for the working class in America.”

Graham, a supporter of Medicare for All, said other wealthy countries provide health care as a right and she compares those systems to public libraries in the U.S.

“They’re not free. We have to pay the librarian, the books, the building, but when you walk into a library, you just hand them your library card and you leave with a book,” Graham said. “You don’t pay anything at that time of service and you never get a bill and you sure as heck never go bankrupt.”

Mauro has publicly supported Medicare for All since his unsuccessful 2018 campaign for Iowa’s third district congressional seat.

“In the immediate future, we should lower the eligibility age of Social Security to 55,” Mauro said. “We nee to expand the Childrens’ Health Insurance Program for every child under the age of 18.”

And Mauro proposes giving Americans who’ve lost their jobs during the pandemic the option of getting subsidies to buy private insurance through the “ObamaCare” exchanges.

The four candidates made their comments last night during an hour-long forum broadcast live on Iowa PBS. There was no studio audience and, as another health precautions, the candidates were separated by clear Plexiglas dividers.