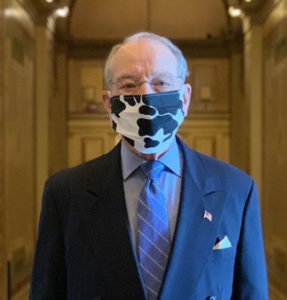 Iowa Senator Chuck Grassley is renewing his call for the Trump Administration to provide a detailed, written explanation for President Trump’s firing of two inspectors general.

Grassley, a Republican, says he’s been talking with White House lawyers who say he’ll get a response this week. “So, I expect answers,” Grassley says, “and they know I don’t give up.”

It’s the law, Grassley says, as stipulated in the 2008 Inspector General Reform Act. It requires the president to provide Congress with a written explanation of at least 30 days prior to removing an inspector general.

“We want to know the reason for the firing before they’re fired so we can comment on it and determine whether or not there’s a rationale for it,” Grassley says. The president recently announced the termination of State Department Inspector General Steve Linick and Intelligence Community Inspector General Michael Atkinson.

Grassley notes that he raised similar concerns in 2009 when President Obama placed Americorps Inspector General Gerald Walpin on administrative leave and announced plans to terminate him, citing a lack of confidence. Walpin was never reinstated to his position.

On another topic, as gas prices across the U.S. fell to a 50-year low during the pandemic, and while pump prices are starting to creep back up, Grassley says biofuels producers need help now. Grassley says he tried to include the ethanol and biodiesel industries in the original coronavirus relief package several weeks ago, but his amendment didn’t get enough support.

Grassley says, “Today, I’m introducing my amendment that I had tried to get in the CARES Act as a stand-alone bill to support biofuels.” The original measure was designed to reimburse biofuels producers for feedstocks they purchased during the first quarter of 2020.

“My bill will ensure biofuel producers survive this economic downtown,” Grassley says, “and also ensures corn and soybean farmers have a place to sell their products.” Grassley says 130 biofuels plants nationwide have either shut down or cut back during the pandemic, leading to a 40% reduction of ethanol production in Iowa alone. Iowa is the nation’s number-one ethanol producer.