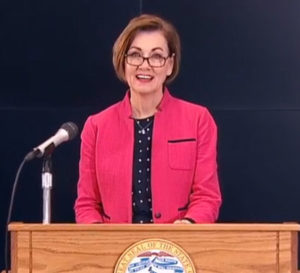 Iowa Governor Kim Reynolds has given the green light for high school baseball and softball to start on June first.

Both seasons were in doubt due to the Covid-19 pandemic. The decision now rests with the Iowa High School Athletic Association and the Iowa Girls High School Athletic Union.  “Effective June first, Iowa schools will be permitted to resume school-sponsored activities and learning. According to the appropriate public health precautions — this will include high school baseball and softball activities,” Reynolds says.

Reynolds says parents and athletes have been anxious to get playing again. “High school athletics was the logical place to start the process of bringing athletics back in season. We are working closely with the Iowa High School Athletic Association and others to make this possible,” she says.

Grinnell high school baseball coach Tony Stenberg says a season would include numerous precations. and the season will look a lot different than in the past. “When I say that I don’t mean the game is going to be different as far as the rules. There’s different health guidelines — you look at the return to play plans that even major league baseball is tossing around right now. There’s things that are going to be put in place that helps keep people safe.”

Stenberg says things like roster limits are being looked at for games and fans sitting along the outside of the diamond. Players would have to sanitize their hands between innings as they go in and out of the dugout.

Stenberg says any precautions that are implemented will be worth it to promote safety. He says he’s willing to do all of the things because it’s about the kids and letting them play.