You are here: Home / News / Recent rains washing away dry areas in the state 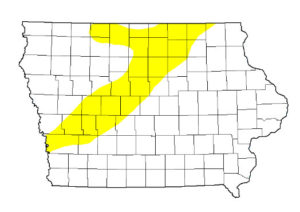 “It looks like with the rain we’ve had over the last several days we should pop out of that. The abnormally dry designation — you are right on the fence of normal versus a little bit dry,” Hall says. Hall says a little dry spell shouldn’t be enough to upset the groundwater balance.

“I mean, this is on the tail end of a couple of solid years of abnormally wet conditions, so there is a lot of moisture in the subsoil out there, the groundwater is in pretty good shape,” according to Hall. “It is not as if we are coming off of an extremely dry period of time. So, I think we are probably going to be okay.”

The dry weather allowed farmers to get a lot of planting done. In some areas they needed a little rain to get the seeds growing. Hall isn’t too worried about going to an extended dry period. He says some of the medium to long-range National Weather Service forecasts are calling for wetter than normal or normal conditions, so he says there’s not a lot of fear of dry weather coming up. And Hall says we are entering some of the months were we get the most rain.