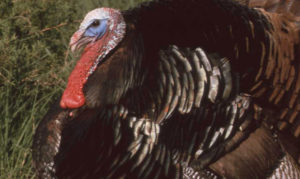 The coronavirus pandemic may have led to a surge in the number of wild turkey hunters this year and a record harvest of the birds.

Iowa DNR wildlife research biologist Jim Coffey says the season ended Sunday and hunters reported taking 14,600 birds. “This will be our highest number recorded from our modern records since 2007 when mandatory reporting came into effect,” Coffey says. The total is well about the previous high for the turkey take of 12,173 back in 2016.

Coffey says one thing stands out as the reason for the increase. “Most likely more hunters. We haven’t got all the data in yet and we will look at success rates — which typically range around 22 to 25 percent — but we are looking at almost a 25 to 30 percent increase in turkey hunters this spring,” according to Coffey.

The wild turkey hunt came as everyone was forced by the pandemic to stay at home and Coffey says that’s likely why more turkey licenses were sold. “That’s kind of the speculation — that you could social distance yourself outside with nature,” Coffey says. Hunters bagged a bird in all 99 Iowa counties.

Coffey says the increase in harvest comes as there’s been a decline in the wild turkey population. He says recent years of wet weather could be part of the reason for the population decline. “Timing of rains can be impactful to wild turkeys and then, of course, cold conditions as well. That might impact the production of insects, which are the primary food resource for the young growing poults,” Coffey explains “So, weather and habitat are always the main factors that are considered with any bird population. But we are always looking at other factors such as predators or disease that might be impacting the populations as well.”

He says the main habitat for wild turkeys is forest land. “Which is mostly found in the eastern third or the southern third of our state — that’s where most of our turkeys are harvested. But we do know that wild turkeys will live in those north-central, northwest areas along river corridor systems,” he says. Coffey says turkeys are smart and they make it very hard to have a successful hunt.

He says the way the birds are hunted also makes it tough. “Males stay in one place and call the females to come to them. And as hunters, we act like a female and try to get the male to come to us. So, we are kind of putting ourselves at a disadvantage right off the bat in trying to mess with Mother Nature,” Coffey says. “So that makes success very difficult. And when we look at 20 to 25 percent success rates — that’s actually pretty good in most years for most hunters.”