You are here: Home / News / Iowa governor says COVID-19 testing to be available to all 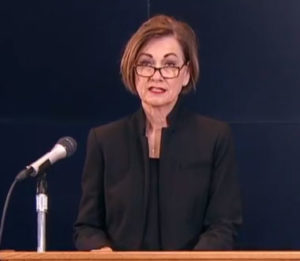 Governor Kim Reynolds has announced the “Test Iowa” screenings for COVID-19 will be open to anyone who wants a test.

“Later today, we’ll be opening the criteria so that anyone who thinks they should be tested can be,” Reynolds said late this morning. “This is especially important as more Iowans return to work, so if you’re interested in being tested, please go to www.TestIowa.com and take the assessment, so this change will be effective by the end of the day.”

There are currently eight “Test Iowa” locations in Iowa and testing had been limited to people with symptoms or who’d been around someone with a confirmed case of COVID-19 — as well as Iowans with so-called “essential” jobs in health care settings or manufacturing and meat packing plants.

“More than 3000 Iowans have been tested at ‘Test Iowa’ sites since Monday and more than 700 appointments are already scheduled for today,” Reynolds said.

When Reynolds announced the Test Iowa program in April, she said it would expand the state’s testing capacity by 3000 tests per day and it has yet to reach that target. Reynolds today said the Test Iowa program currently has enough kits to test 200-thousand people, but it’s not clear how Test Iowa appointments will be prioritized and scheduled now that anyone who wants a test can register for one.

“You know, we’re going to learn as we ramp up and continue to offer this opportunity to more Iowans,” Reynolds said. “There’s going to be some bumps in the road, but that’s to be expected.”

Reynolds hinted that more testing sites will be established.

“We’ll be announcing next week, early next week another phase that will be opening up that will provide Iowans access to testing,” she said during her daily news conference.

Eastern Iowa officials in two counties with confirmed COVID-19 outbreaks say they’ve been unable to get timely Test Iowa results, delaying their efforts to contain the outbreaks. Iowa Department of Public Health deputy director Sarah Reisetter said state officials are aware of those concerns and working to resolve them.

“Our goal is to certainly get lab results to local public health as quickly as possible,” Reisetter said, “because we undetrstand that contact tracing and case investigation is just such an important component to be able to contain the virus when it is detected in our state.”

In mid-May, Black Hawk County officials said they had received no Test Iowa results during the first two weeks of testing there. The Cedar Rapids Gazette and The Des Moines Register  have reported Linn County public officials say they’re at a disadvantage due to a lack of timely Test Iowa data from a testing site in Cedar Rapids.