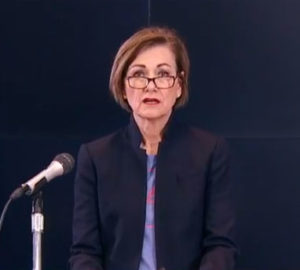 Governor Kim Reynolds says the state is using emergency funds from the federal government to cover some of the increase in unemployment payouts.

The latest data shows one in 10 Iowans in the workforce had beed laid off and were getting unemployment checks in April. Iowa Workforce Development had originally planned to increase some business taxes if the state unemployment trust fund used to pay those benefits dipped too far.

“We’re monitoring that on a weekly basis and then we’ll make a decision next week on how we’re going to move forward with handling the trigger and really monitoring what we’re going to do with the trust fund,” Reynolds says. “…because that impacts businesses.”

If the state’s unemployment trust fund dipped to $950 million, state officials had planned to increase taxes paid into the fund on businesses that laid people off. The governor did not indicate how much federal money they’ve used instead to avoid charging those taxes.